Flexible code/data sharing within the same or various AWS accounts, AWS lambda layers introduced in 2018. Although AWS Lambda supports a variety of environments, in this article we will exclusively discuss Node.js. I’ll go through how to create lambda layers and how to apply them to Lambda functions.

The following use cases built for lambda layers in an AWS Lambda environment that supports Node.js:

Small number of public npm packages natively supported in lambda environments. You will need to establish standard lambda layers that can used throughout your whole AWS setup for all other npm packages.

Node modules that you created specifically for your system’s needs.

However, you must turn your customised Node.js code into Node modules. Most node modules have these 3 components:

Why use lambda layers?

Developers frequently need to share common libraries amongst micro services when creating nodeJS microservices apps in AWS. The lambda function’s file size rise if those common libraries rewritten or imported into each microservice, which slow down the deployment process. AWS Lambda layers are a possible remedy for developers.

Lambda layers, which are zip archives that can contain extra codes like libraries and dependencies, are highly helpful for exchanging code across lambda functions. This technique minimises the overall size of the bundle published during a deployment by transferring dependencies or libraries from your function code to a layer. Up to five levels can added by developers for each function. Lambda layers are by default private, but developers may make them public or share them with other AWS accounts.

Because they are immutable, lambda layers versioned to control changes. Functions that previously utilised a version will continue to function even after it destroyed or its usage has restricted, but you won’t create new ones.

The storage of lambda layers takes part in the AWS Lambda function storage per region limit which is 75GB.

The advantages of AWS lambda layers

Permissions for the Lambda Layer

In this example, I’ll build a lambda layer for a straightforward response helper so that we can use it across all of our services without having to develop it separately for each one. We must first use sls create -t node-js to establish a serverless project. Then, using nodeJS, we must set up a folder structure similar to the one shown below.

The next step is to use npm init to initialise a npm module within the response-helper directory.

The response helper logic must written in an index.js file in the response-helper directory, which then exported. 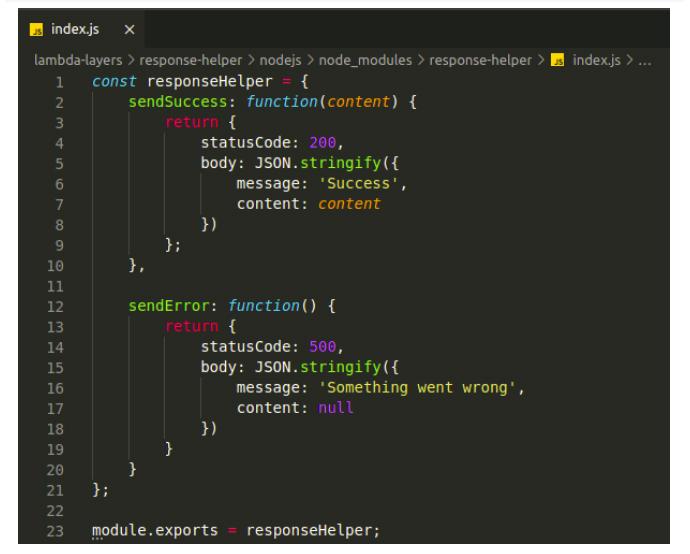 You must create your response helper and provide the path in the serverless.yml file beneath the layers. 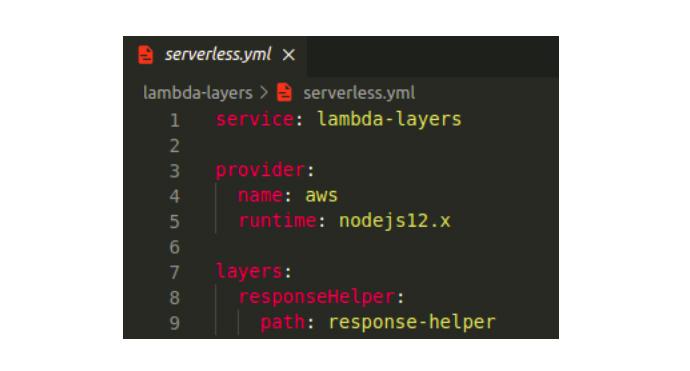 After everything set up correctly, you must deploy the service using sls deploy. Your lambda layer will appear in the layer section of the lambda function service once you have deployed it. 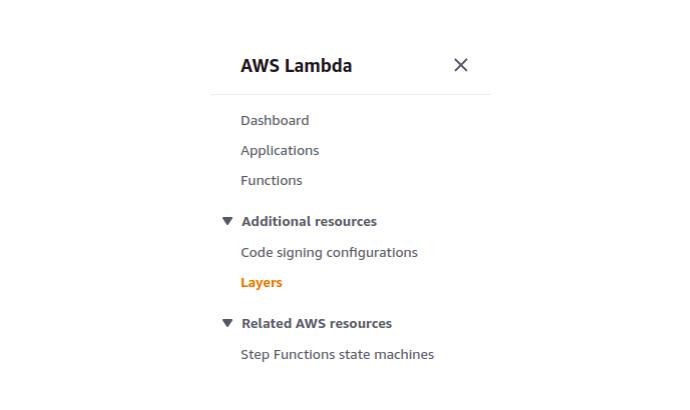 You can currently view the stack of the lambda layer in the cloudformation.

The qualifiedarn of your lambda layer may seen in the stack’s output section. You may now use it as a reference in your lambda functions.

Must reference the lambda layer’s qualified arn as seen in the following image in the layers portion of your handler function in order to add a lambda layer.

You must import the response helper just as you would a javascript module in order to use it in your service handler method.

The desired answer may obtained as shown below once all the necessary steps taken and your API called using an API client.

In this post, I did my best to describe AWS Lambda layers. I hope you discovered what you were looking for. And I hope you took something away from this post.

Because of Jaiinfoway Data’s excellent connection with 100+ data sources (including 40+ free sources), you may enrich and amend your data before exporting and loading it to the destination of your choosing. Jaiinfoway‘s inbuilt Webhooks Connector also allows for the inclusion of data from non-native sources. Following that, you may concentrate on your primary business requirements and conduct intelligent analysis with BI technologies.